Backyard Wiffle Ball is the ultimate way to play America’s pastime – baseball. With the ability to play just about anywhere and with any amount of players, Wiffle Ball is all inclusive.

We’ll give you a quick insight to the rules, how to play, and some tips on how you can be the best Wiffle Ball player in your league!

Like baseball, the team with the highest run total at the end of a set number of innings determines the winner. Normally, a game will be 5-6 innings, but many leagues use nine innings to complete a game. An inning is completed when both teams have batted in a block.

For example, Inning 1 is complete when the away and home team have both had a chance to bat.

Once both teams have batted and completed their outs, the inning will turn over to the next number in the following order. 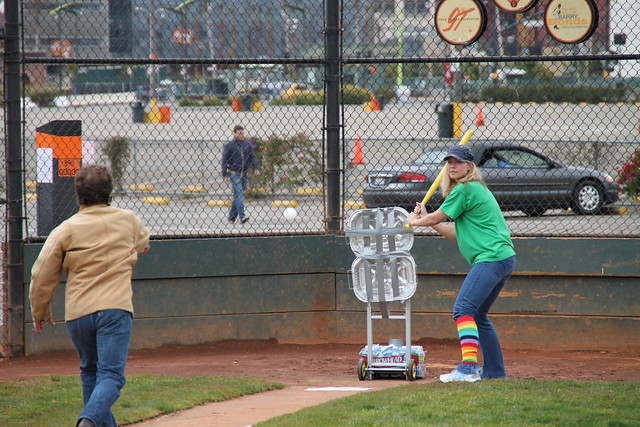 Typically, Wiffle Ball is played with just 2 outs per inning, but can be adjusted to the number of players on each team.

You do not usually run the bases in a game of Wiffle Ball. Where you hit the ball determines what ‘base’ you are on. I will go into further detail in the ‘rules’ section.

However, if you're feeling particularly energetic and want to run the bases, have at it! Because you only have a few players on each team, usually people who want to run the bases will play "pitcher's hand" which means that the pitcher functions as a first baseman and if you hit a ground ball the and the defense is able to throw the ball to their pitcher before you get to first base, you're out. ​

Wiffle Ball is played with a bat, ball, strike zone (made into a rectangular shape), cones and sometimes even fences for home runs.

How to Play Wiffle Ball

As mentioned before, Wiffle Ball is played with a set number of players on each team. Teams take turns fielding and batting.

Fields are broken into four categories: Single, Double, Triple and Home Run. Refer to the image below for a great visual aid.

The markers or cones can be placed 20 feet apart to create the areas. As you can see, it works if you place the cones further and further away from each other on the left and right side to create a playing field similar to a pizza slice. Markers should be roughly 20 feet between each area. For example: 20 feet from single to double, double to triple and triple to home run area.

Depending on your size, skill and Wiffle Ball level, the ‘pitching rubber’ is usually 35-40 feet away from a batter. The pitching rubber is the rectangle inside of the ‘Single Area’.

The ‘Home-Run’ area should be roughly 80-90 feet away from a batter. However, if you are younger or new to the game, adjust the Home Run are as you see fit.

→ Runner on first base moves to second on a single, third on a double and home on a triple.

→ Runner on second base moves to third on a single and home on a double or triple.

→ Runner on third base scores on any fair hit that is not an out.

Playing defense varies depending on how many players you have on your field.

Most commonly, you are trying to get 2 or 3 outs – depending on your house rules or league rules. Either way, you are either trying to catch a pop fly, pick up a ground ball before it stops rolling or strike out a batter.

A pop fly happens when a ball is hit in the air and is caught by the opposing team before it touches the ground. If a ball is hit on the ground and you pick it up cleanly (not dropping it bobbling it) before the ball stops rolling, that is an out.

The ball must clearly be in motion and cannot stop at any point before being picked up.

Lastly, a strikeout consist of a batter not hitting the ball before 3 strikes have been called. Typically, you have either an umpire calling the balls and strikes, but Wiffle Ball has its own strike zone (a rectangle) that can be built or purchased.

Depending on your rules, batters may not be allowed to take a base on four balls, or being hit by a pitch.

In some leagues, full baseball rules are applied, resulting in the traditional 4 balls – 3 strikes method. If you are not choosing to play with base on balls, if you throw 4 balls to your batter, the batter can get a fresh count.

A fresh count would wipe away any strikes on the batter, and start the new count at 0-0.

Like any professional baseball pitcher, having a Wiffle Ball pitch that dances like your parents at a club (unorthodox) is key to helping you win. There are numerous grips and pressures that can be applied to the ball to make it go in one direction or another. Look at the photo to see some simple Wiffle ball grips easy to master.

As a batter, you don’t want to look like you’re swinging a garden hose, flailing the bat everywhere.

Before you are ready to bat, know your strike zone.

Pitches can move and dance in weird directions, so you will need to be ready with some fast reflexes. But, knowing your strike zone is a great way to approach the plate and being able to hit.